He smiled and said:

You can’t laugh at the same joke again and again,
but why you do keep crying over the same thing
over and over again?

There have been plenty of emperors since Bimbisar, a contemporary of Gautam Buddha, who formed the first empire in the subcontinent. So Akbar is not responsible for uniting India geographically. But Akbar’s contributions go far beyond that.

Akbar’s political contributions extend to politically uniting different existing kingdoms under one umbrella. The Rajput kingdoms under Akbar’s Mughal empire were not merely tribute-contributing vassals. They were almost an integral part of the empire despite maintaining much of their freedom and often fought wars with the Mughal army under a common banner.

Akbar and his minister Todar Mal devised a land measurement and tax collection system that worked right till the end of British rule. In fact, any time that the British tried to impose their own system of tax collection, it had usually resulted in famines. Akbar’s system was resilient and unbreakable for centuries. 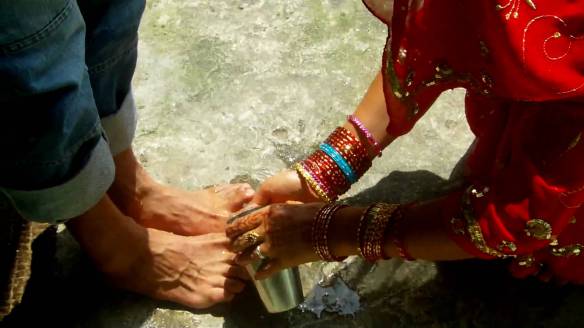 It irritates me when a man fawningly says “Ladies First!” I find it condescending. As a woman I see myself as perfectly able as any man and see no reason for being singled out that way.

Yet, by the same token I hugely resent the “Men First!” approach that I encounter everywhere in India. While walking on pavements, driving, inside homes, and even in offices. It’s that attitude that says, men are entitled to shove women aside and be served first.

It happened again at the bank yesterday and left me fuming. I had accompanied my mother to the bank and she needed some cash deposited. There was a long queue at the counter, so I told her to sit down and I’d stand in line and do it for her. A man came and stood behind me, and then suddenly moved in front and stood next…

“Birth is misery, old age is misery, and so are disease and death, and indeed, nothing but misery is Samsâra, in which men suffer distress.” -Mahavira, Uttarâdhyayana Sûtra, Lecture 19, Verse 15. 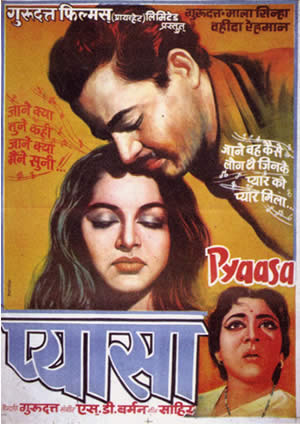 Pyaasa movie poster depicting Vijay (Guru Dutt), and Gulabo (Waheeda Rahman) in the center, with Meena (Mala Sinha) looking on unhappily from the corner. This poster kind of gives away the resolution of the love triangle.
Image source: A Tangle of Wires

This is probably the most beautiful, poetic Bollywood film I’ve seen to date. For what it’s worth, Time Magazine agrees that its one of the best in cinema history. You really should watch it for yourself, but not everyone has a 2 hour commitment. So just read the post instead. You’ll feel like you saw it. A small…

CHINDIA ALERT: You'll be living in their world, very soon

On a hot Tuesday afternoon, I walked into the recently reopened Dalit park in Noida, outside New Delhi. This is the park built by Mayawati, the 57-year-old former chief minister of Uttar Pradesh, as a memorial to the class of people long known in India as “untouchables.” A Dalit herself, Mayawati is a symbol of what traditionally oppressed classes and castes in India can do with their lives.

Of course, Mayawati has been accused by her political opponents of wasting money — lots of it. She seems like an easy target, especially when she has commissioned statues of herself. For a senior Congress politician, erecting one’s own statue was an act of ‘megalomania’. But the symbolism that this structure seeks to attach itself with — asserting Dalit identity and acknowledging “sacrifices” made by people of backward classes — is hard to miss.

The high central chamber of the Dalit park…

To me, the most memorable scene in Dev D is the one where Paro takes a mattress from home and ties it to her cycle. When she reaches the edge of the field, she abandons the cycle, lifts the mattress on her shoulder and marches to the clearing where she lays it down and waits for her lover. There are no words spoken and the camera holds her face close. Her expression is one of intense seriousness. You can see her desire is a field force of intensity that fuels every step. She is determined to see it through, to let that desire take over herself completely; not surrender to it but to let it explode out of her. You know that when she meets Dev, the sex would be passionate and powerful.  And yet, in the south Delhi multiplex where I was watching the… So, it has been a while that people have been asking me to write and I was also giving it a serious thought, the only handicap being what to write on! I thank Tehelka from the bottom of my heart for giving me a break. Recently I came across a bunch of cartoons published by this Magazine in support of “Freedom of Expression” in textbooks. Well, all the cartoons were amusing, but one in particular hit the nerve. This one has Ekalvya retorting to some Mr Sen’ s question of ruling class deciding what goes in the books to “ The last time the ruling class decided who could learn what…I had to sacrifice my %&*ing thumb”.  Now, this cartoon makes me deeply uncomfortable. Ekvalya is a powerful bahujan icon. He symbolises the dalit and adivasi minority who were denied access and resources to upward mobility. He symbolises the…

Welcome to WordPress.com. After you read this, you should delete and write your own post, with a new title above. Or hit Add New on the left (of the admin dashboard) to start a fresh post.